This post would not have come into existence without Lexi over at A Blasted, Cratered Land.

Some of the following material comes from my new GLOGhack HEIMJING, which I will release October 15th. Happy GLOGtober.

What are magic words?

Solidary words strung together that require more effort to use than a more typical GLOG spell. To give some touchstones, here are a couple GLOG spells that require varying amounts of input to adjudicate, taken from the excellent list of 100 Orthodox Spells by Skerples. I'll rate these on a scale from 1-5 in terms of mental spoon cost, from barely noticeable to totally distracting from the main game.

"Rippling rings of purple light pour from the caster's forehead. All sounds are cancelled within the area of this spell. Creatures are deafened until the spell ends or they leave the spell's area."

This is about as easy to parse as it gets. For a player or GM busy tracking other numbers like exact inventory, this is a mental lacunae amidst coin counting. However, while the immediate effect is simple to resolve, the ongoing area of effect and how it affects interactions requires some brainpower from the GM's and the party, especially in tactical engagements where using this spell may deprive creatures of communication ability. Any spell that has an exact radius of effect also requires a spoon to decide what is and isn't within range.

"Target creature of [dice] HD or less must Save vs Fear or take a Morale check, or believe that someone close to them has suddenly and tragically died. They will not associate the caster with this death, but intelligent creatures may believe the caster is only informing them to cause them grief."

This requires an analysis of the target creature, which is an unknown quantity, and uses more of the GM's spoons briefly to resolve. It also requires foresight on the player's part - a zombie will not be affected by grief like it would be by deafness. Despite the higher initial uncertainty, the ongoing effect is singular, which usually makes it simpler to rule over time than the Negasonic Ray.

Now, higher spoon costs aren't bad. Spells need to have a variety of both immediate/ongoing effects as well as different levels of complexity. The issue comes when the spoons are too unevenly weighted. In both examples, the GM has to do more work maintaining both spells.

(Yes, the GM does more work than the players. This is an unspoken rule of D&D.)

Another complaint: players usually have less motivation to track the durations of negative effects. If a party deafens themselves using Negasonic Ray and continues to communicate normally, it is up to the GM to re-enforce the spell as they see fit. This is reflected in the parenthetical spoon costs. Other systems won't necessarily solve this problem, but might alleviate it.

A good rule of thumb for measuring spoon cost is the amount of "uh, ums" that are thrown out while a GM thinks over a spell. More than 4 "err's" and that spell is a tricky one.

One final comment: any GLOG magic system may steal another spoon by stumbling into mishaps or dooms, which may affect other characters. This isn't...bad, really - it just takes longer to resolve the individual spell. If that mishap or doom centers squarely on the wizard, though, it lengthens the time spent waiting for the spell and all associated effects to resolve, which is something to keep in mind when writing spoon-greedy spells. (For Skerples' Sorcerer, this is particularly notorious, but part of the fun with Sorcerers is waiting for them to explode.)

I assume you don't enjoy memorizing and ruling on specifically worded 5e spells that frontload spoons through mechanical complexity. Some people like that - power to them! - I always found it more interesting to seek loopholes in the wording or exploit rule conflicts rather than come up with creative ways to apply the rigidly written spell. I also don't like math. Now you know my biases.

So, magic words. A good way to make this less complex and more freeform?

Yes and no. On paper, magic word systems are a designer's dream - simply put down a list, give a couple vague guidelines, and off to the races with you.

The one I wrote was simple: roll 1d20 on a word list, then bash the words together, adding prepositions as necessary to make a unique spell.

Magic word systems end up being entirely GM reliant in most cases. Some give players a good amount of power to interpret the effects, but all of them involve a serious negotiation between the player and GM both in fiction and out of fiction that happens aside from the rest of the game.

Now, I enjoy making a narrative out of broadly applied tools, but rebalancing spoon distribution by taking all of them isn't the goal. Any normal action in a game, unless directed to the entire party, shouldn't take up all the GM's attention for long. A minute is too long.

Of course, there are exceptions, like rolling on a death and dismemberment table, or negotiation between the party spokesperson and a dragon, but that creates additional tension because the results of those focused interactions affect other party members. Engaging in a side dialogue bores other players, especially over a normal action like casting a spell.

Be careful that you don't let your enjoyment of problem-solving get in the way of a well-paced game!

What about word magic systems? How are they different?

Let's look at the core mechanic for Lexi's Psion.

"WORD: You are a WORD. To wield your psionic powers, compose a sentence that uses your WORD as the main verb. Roll 1d6 for each word in the sentence. If the total is less than your INT, the sentence occurs, to the letter. If the total is greater, the GM gets to change 1 of the words in the sentence (besides your word) for each die that came up 3 or greater, then the new sentence takes effect. In any case, something will happen. Psionic effects only persist while you are within line of sight. You can only have (INT) words of effects going at any time."

This begins something important: shifting the onus of magical creation and the spoon burden from the GM to the player. It also doesn't mandate GM interaction; smart players with a reasonable Int score can probably fashion a workable sentence without involving them most of the time.

To wit: magic word systems are where you kitbash words together to create unique effects and then negotiate these effects, where word magic systems involve crafting short spell-like phrases that are simple to arbitrate. There is overlap between the two, but a well-designed word magic system will require less GM spoons than a magic word system. (If there are other definitions, please let me know.)

It wouldn't be a Lexi class without a list of quality options, though, so let's examine some of those.

"9. Gourmand. When you eat something, you can choose a WORD it is. That WORD is immutable in your sentences. You can only have (Psion level) of words eaten at any one time."

This is an excellent effect that is entirely on the player to track. It adds complexity without drastically increasing the initial spoon cost for either party.

Seems like all this spoon discussion veils the cold, hard fact that word magic is wrangling words into sentences following specific rules. Like poetry.

"Couplets: You can write two short, simple lines of doggerel in runes. They must rhyme and follow the same meter. If you read the couplet aloud (takes a round), it takes effect."

This is taken from my Calligrapher class. I worried placing all the onus on the player to craft a small poem would be handicapping or distract from the main game, but my Calligrapher seems to be enjoying himself so far! Here are some quality examples:

"Go forth phantom eyes, fly on in my stead"

Bestow a vision of what lies ahead"

"One falling to heaven below

Drift back up, lighter than fresh snow"

"Oblid is a foolish bastard

I, WingTam, am Dungeon Master"

The last one isn't useable (or is it?), but I appreciate a good turn of verse.

In case you've been counting, each verse is 10 syllables or less. This appears to be a sweet spot. I'd also rule that people who wanted to compose in another language could do so as long as they provided the translation. Putting the couplets in chat is mandatory, but English isn't.

I also restricted the use of Calligrapher abilities to 2 x [templates] per day, so poems face a stiff bottleneck.

What if composing poetry isn't my preferred mode of expression?

Fear not, my sweet readers. Here's the other word magic method that Calligraphers can choose:

"Logograms: You have mastered 2 logograms. If you deduce a similarity between a thing and your logogram and write it down (takes one round), you may steal that similarity, even placing it on another. Stamping is valid."

I can't offer much commentary or spoon estimates on this one because it is untested, but I can say that it's simple to create another variant by having Logograms boost similarities instead of taking them.

While this method may have a higher spoon cost to resolve exactly the effects of stealing something linked to a Logogram (eg: taking 'size' from a giant with the 'Mountain' logogram) I think this will create more tactical scenarios with power transfer. (I apologize for using logogram so much, but 'character' already has a meaning in D&D.)

One of the reasons word magic systems are rare is that they're very hard to concisely write and balance. My advice is to spend less time mechanically delineating restrictions that can be made with common sense and simply write your central concept down. It's true that you'll have to spend more spoons answering questions in play, but GM's can't anticipate player questions anyways. Here are some ideas to get you thinking:

A good word magic system should encourage lateral thinking on the player's part to manifest the effect they desire, and incur a minimal spoon cost for the GM.
at October 07, 2020

This post would not have come into existence without Lexi over at A Blasted, Cratered Land .   Some of the following material comes from my ... 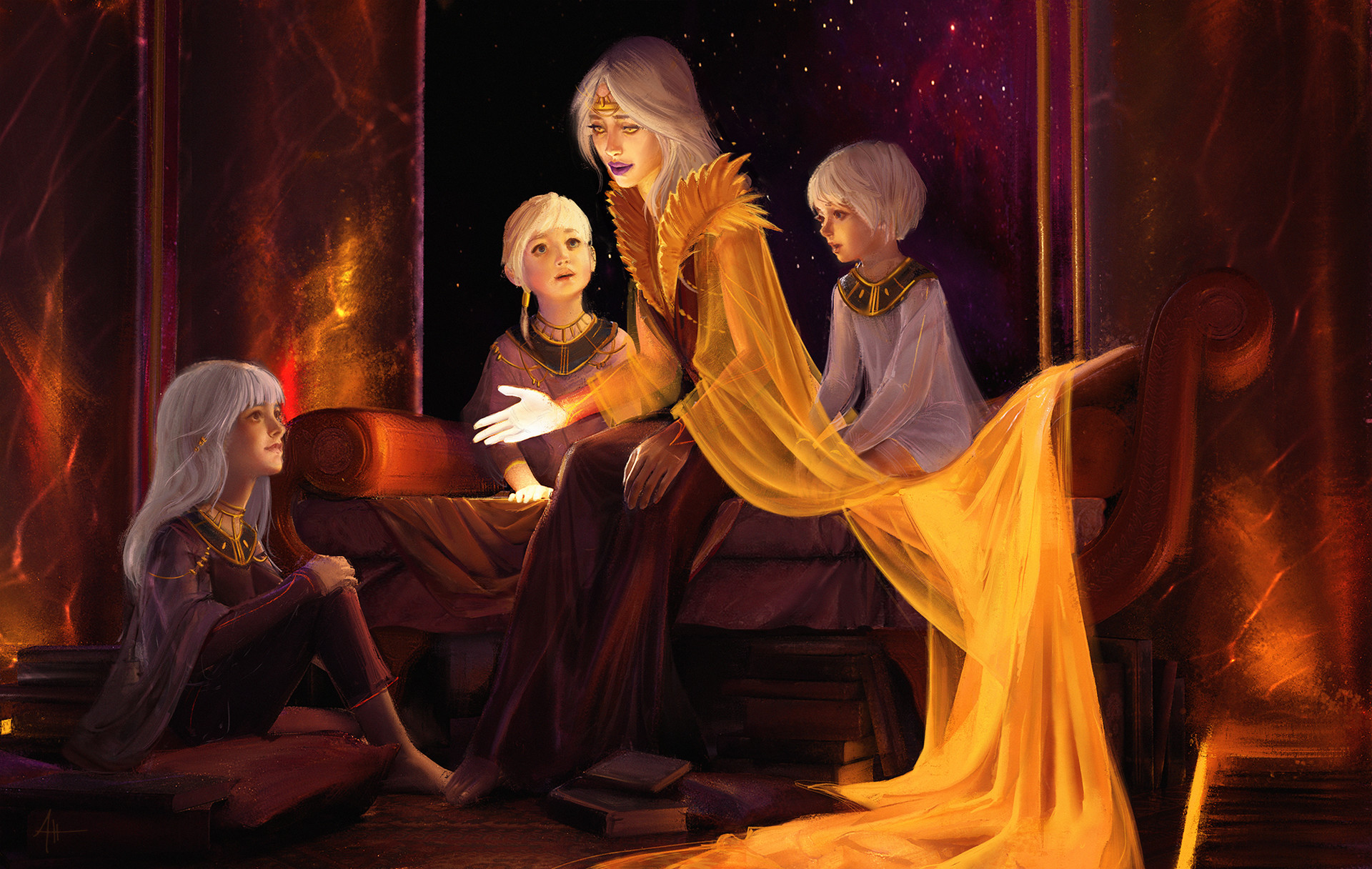