In the diaspora following the twilight ages of Google+, my escape has been to Discord. I've tried MeWe, Reddit, but ultimately returned to Chris McDowall's little hub of RPG activity.

In short, MeWe was too sparsely populated when I was on there and everything on Reddit has a half-life. I like Discord - more than I liked G+, but I didn't engage on G+ much as I should've. Too young.

G+ was more suited to RPG discussions because of its largely sedate pace, comment chains, ease of community creation, and the social media framework that let you repost and +1 material, spreading it further across the OSR scene than posting in the #blogroll channel, hoping someone might bring it up in #links and discussion, and posting a link in the OSR subreddit.

Discord is a chat platform. It serves quite well as an incubator for new ideas and communities (assuming you check it regularly). RPG's are part math, which provides clarity and lends itself to answers, and part art, which provides as many or as few answers as you desire. Any platform that discusses RPG's has to accommodate terse back-and-forth and long conceptual discussions. Discord does the former with ease, but you have to work at a longer conversation.

These conversations fall into several rough patterns. All of this is apocryphal.

When a new take is posted (because nothing is original), two tragedies, one good thing, and one great thing happen.

I have cherry-picked data to support my conclusions below. All these comments are, more or less, responses to the GLOG hack I had just posted in this channel 10 days ago. 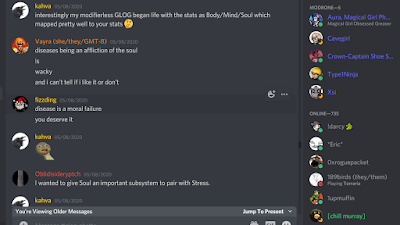 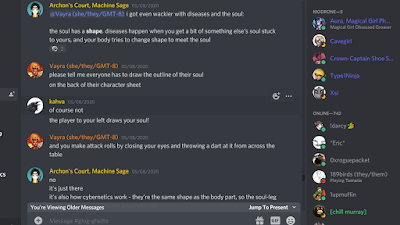 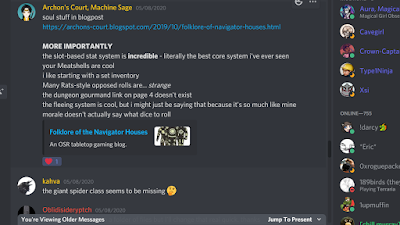 Why do I care about these tragedies?

RPG's are, in my mind, closest to Art than anything else. This means they grow through critique. In Discord, two things hamper the unfolding of this critique.

#1: The Tragedy of Telephone
The first is due to the nature of the medium. There's a tendency among us Discord users to surf the conversational wave, riffing snappy remarks over whatever just got said. It's like a game of telephone: very entertaining, but the focus usually ends up being on the last witty remark rather than what prompted the conversation. This can be frustrating, especially if you're looking for some feedback or even just praise for a document you've spent weeks on.


#2: The Tragedy of Convergent Evolution
In all art forms, there is a very keen sense of heritage, and RPG's are no different. Whenever someone brings up an idea, I'm driven (especially as an artist) to post an idea someone else wrote similar to theirs or my take on the same concept as a way to help them. This is not a bad instinct but it hampers RPG brainstorming in several ways.

RPG brainstorming works best in the moment, when everyone involved is throwing out their ideas in a form of psychological flow. It's amazing when you throw yourself into it. Posting someone else's take interrupts that, because it encourages other people to read someone else's ideas for inspiration, breaking part of the group out of the creative flow. We made a 1000+ mech name generator once in a couple hours. It was wild, and nobody questioned it or posted inspiration posts.

Also, remember that sense of heritage? Well, everyone tends to remember whose take on a specific concept was the first one, especially if that writer is prolific. Skerples' Rat on a Stick/Many Rats on Many Sticks get thrown around as example GLOG hacks for that reason.

Before I draw my next conclusion, I want to say: this is a hobby. None of us (well, very few of us) are professional RPG producers. All of us excel at some other task, but this is our creative outlet, and it's very hard to avoid comparing our work to others or to avoid feeling inferior to those who write more frequently and better than we do.

Because of all of these factors, when someone posts a new take, and it contains an idea I've had but not written about publicly, I'll chime in "oh, I did that too" out of fear that if I ever write up my idea down the line someone else will say "didn't so-and-so do that?", which strips my post of any "freshness" and nonsensical "originality" I thought it had.

Basically, name-dropping makes my ideas feel less special, because I want to be original and cool like those other prolific writers. Gotta stop comparing myself.

I'm not proud of my behavior, but I understand it now. Also, because of the utter lack of context (body language/tone) every time I tag on to someone else's idea as my own, I seem like a narcissist because instead of responding to their take I make it about me.

It's about not wanting to be irrelevant.

So, now that I've established that I want to feel like a part of this community, how can I do that while still helping others to grow their ideas?


#3: Praise the work of others
Making art is hard. That's generalizing bullshit, everything is hard to some degree, but putting our tender works out there to people whose names we don't know is kinda scary. Praise goes a long way towards alleviating our worry that nobody cares about what we write. I believe we do care about what other people make, we just don't always show that. Please don't forget to tag blogposts with emoji's in #blogroll if you like them and comment on the post. It means a lot to us.


#4: Offer critical feedback
Every time I write some RPG thing, it's never finished. As art forms, RPG's can't be static, but as math, they demand stability. This push-and-pull drives a huge urge to tinker and innovate, which is good, but also an insecurity that what we write is flawed, which is bad.

Critical feedback is crucial to managing that nagging feeling. Fresh eyes telling us what they like, what they're confused about, and what they think needs more work is one of the greatest forms of validation any person can receive.

I know things are kinda loosey-goosey in Discord. We don't have much formal structure outside channels, but I think we need to set aside a bit of time to critique GLOG stuff and anything else someone asks for feedback on. It can be pretty mentally taxing, but I've seen an uptick in activity ever since quarantine began, and there's a lot of us looking for some good feelings. So, next time someone posts something, let's critique it. If we get in the habit, we'll go places.

Sidenote: critique is different from review. Review implies a finished product, and while those exist, not many exist in my little Discord corner. Here's one overview of GLOG stuff by Anne of DIY and Dragons,  two reviews by Archon's Court, and one review by Skerples.

While this is targeted to Discord, it can really apply to any platform we post content on.

Email ThisBlogThis!Share to TwitterShare to FacebookShare to Pinterest
Labels: Theory 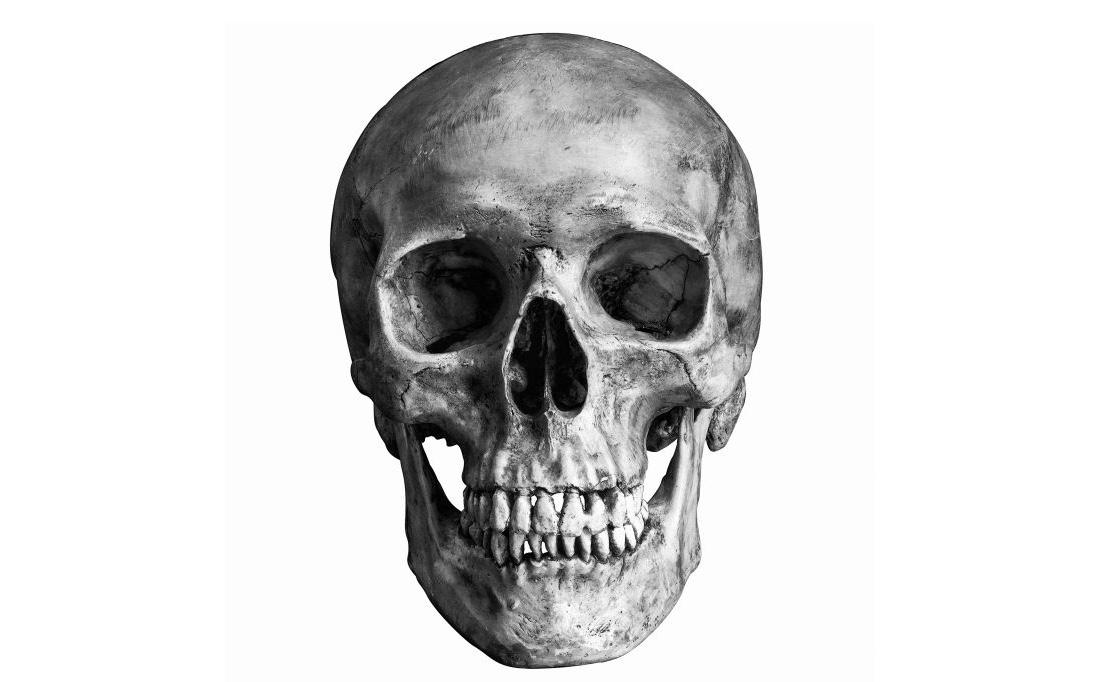 Features
Here's the Google Docs link for an evolving version.

Why These Rules
The following is reproduced at the bottom of these BONES, but in case you don't want to scroll down all that way, here you go:

I reduced the stats to inventories. That’s what a character is, when you pare away the derived numbers - a list of traits that make them an individual. Your PC isn’t defined by their Intelligence and Wisdom. They’re defined by what they know and how they use it, and that information can’t be reduced to a number disassociated from the concepts that define them. Bones PC’s may seem more complex than other OSR systems, but I’d like to argue that I’m simply increasing the information density of a character. The goal is to have all the items inside the stat pissing out.

Part of the 6-stat orthodoxy is the diffusion of power across stats to avoid any one becoming too good. The risk of imbalance is greater with less stats, but I want my stats more impactful as opposed to struggling to find a purpose for certain stats outside niche class features.

I also included rules for friends because of the weird paradox inherent in dungeoncrawling, where you trust someone to save your life but are careful to not form a lasting attachment because they might die. I say bollocks to that. If y’all’re playing this game together y’all’re probably going to become friends anyway. No need to assume your PC’s are emotionally distant robots. Care for each other. I think the game becomes richer with that kind of investment.

I don’t like numbers. Fiddly +1 to X, -1 to X  - yes, it arouses the pattern finder, but sums are the first thing defenestrated by memory in stressful situations. Does balancing systems of bonuses make the game more fun or are they simply fun to design? Depends on you and your players.

Does any of the philosophizing above really matter? I don’t know. If 3.5, 5e, or Mothership work for you, go for it. Play what makes you happy. But try to find out what doesn’t work, and make it better.